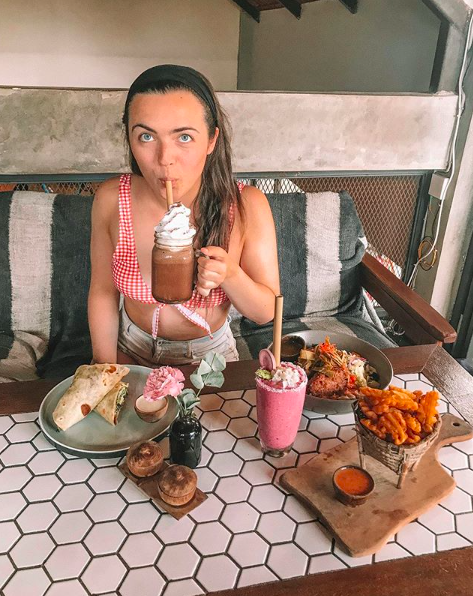 Increasingly, I’m inspired by my friends and family asking me questions about being veggie/vegan and how they can move towards a more eco-friendly lifestyle. Before more recent years, going vegan was largely thought of as a stand against poor animal ethics, but now I think people are beginning to understand the true impact our diets have on the planet.

I’ve put this post together to highlight a few of the ways you can transition more easily into a vegan diet without feeling overwhelmed or sacrificing any of your favourite non-vegan foods. There is literally a vegan option for everything now and they just keep getting better!
Do Your Research
Whether you want to make this change for personal reasons, the environment, ethical reasons or whatever else – look into how going vegan will make an impact. Really getting to grips with the difference you’ll be making will undoubtedly give you the motivation you might need to take it seriously and commit. In terms of environmental change, I’d really recommend watching something like Cowspiracy on Netflix.

Go Veggie First
If you’re particularly nervous about going cold turkey (no pun intended), make the change gradually. If you go veggie first, you might be more likely to stick to the change; ease yourself in rather than adopting an ‘all or nothing’ mentality. If you dive in headfirst, it can be a bit overwhelming.

Don’t Use Labels
Following on from that, I think immediately labelling yourself as vegan can be a challenge. You start to punish yourself for tiny slip-ups and you may even give up entirely if you make the smallest ‘mistake’, thinking there’s no point in you carrying on. But the reality is, any change you make is a change. No one is asking for perfection (which, by the way, doesn’t exist on an ethical level).

Get Excited
Browse the internet for some amazing recipes. Search on Instagram, YouTube (I’d particularly recommend this channel), supermarket aisles, Pinterest, and recipe books and get compiling. Also make a list of all of your favourite non-vegan foods and find the best recipes for the vegan versions. Try to keep an open mind and you might be surprised about how great an avocado chocolate cake tastes!

One Day At A Time
If you think about never eating meat or dairy again for the rest of your life, you might feel defeated before you’ve even started. But don’t freak out! Just wake up each morning and do the best you can. Some days may not be as successful as others, but just take them in your stride and carry on.

Make Sure You’re Healthy
One thing that really baffles me about being vegan is that people take a sudden and intense interest in your nutrition and ‘whether you’re getting all your vitamins’. Funnily enough, these people don’t seem to worry much about their non-vegan friends who probably have sausage, chips and ketchup most days for dinner… but what they’re saying does have some importance. When you go vegan, it’s important to be clued up on where your nutrients are coming from and that you’re getting everything you need. A frequently asked question is “but where do you get your protein from?”. That’s a whole other topic I won’t get into right now, but to cut a long story short – it is entirely possible (and effortless) to get everything you need from a vegan diet. Just make sure you read up on it and ensure you have a balanced diet – that goes for meat-eaters too!